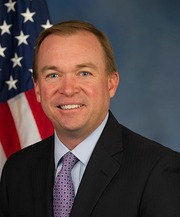 >> dickerson: and now for the administration's take on the budget and healthcare, joining us now is white house budget director mick mulvaney. welcome, mr. director, i want to start with something the president told tucker carlson on fox about the healthcare plan. he acknowledged that the people who voted for him and sent him to washington bear the brunt of a lot of these changes in the healthcare bill panned he said, quote, we need to take care of our people -- meaning the bill, how will he take care of his bill without fundamentally changing the bill? >> the same way we have taken people for a long time in this country which is through competition, i think it is one thing that doesn't get heavily reported is that part of the problem with obamacare right now, and i discovered this first time, i live in south carolina, we are down to one provider, you can imagine what that does to price competition on costs, it doesn't do anything, but increase the costs, and one, the key points of the plan that is in the republican house right now is it is going to encourage more competition, which will lower the cost for everybody, not just trump voters. >> dickerson: but the president's remarks here were having taken all of that into
11:01 am

account, knowing there is competition in the bill, what he is responding to are studies that showed the tax credits go to the wealthy and that there are tax breaks i should say and the tax credit doesn't really help people who are just above medicaid and he was saying that part of this is being negotiated in this interview with tucker carlson, he says that is part of the negotiation, i so so i am wondering if this is part of the negotiation what is he asking for to make it better for the people -- >> your first comment about how the wealthy get all of the tax cuts, we promised, the president promised to repeal all of obamacare and that's what we were taxed at the beginning, so i keep wondering why folks just want to focus on who gets a little bit of a tax benefit instead of focusing on the fact we are replacing truly broken system. but to your point about what we are trying to do is to make sure the folks that various options available to them, they are going to get the tax credit, we are going to have hsas that don't exist anymore and lower their net costs on an after-tax basis and also introduce this competition, so the president knows, belief me, we know who his voters are and we are going to take care of them, there is
11:02 am

no question about that, but it doesn't mean we are leaving obamacare in place because that would hurt them dramatically. >> i guess the president, if i am in the middle and a working class person, you know, and i voted for president trump, what am i getting out of this? just as a political thing, what am i get something. >> you are getting something which you don't get right now which is care you can afford. and that is important. the affordable care act was. really obamacare, it wasn't really the affordable care act, it was the affordable coverage act. of an those people that just, you just described could afford to buy insurance but they couldn't afford to go too the doctor because the deductibles were so high. >> dickerson: but what are the studies that show 64-year-old, his premiums going from 1,700 to 14,000? that is not affordable. >> does, it doesn't take into consideration, first of all the other things we will be doing, keep in mind the reports you mentioned don't deal with any of the regulatory reform that tom price at hhs is trying to put in place and doesn't take into account any of the other the what we call the phase three programs that we are trying to push through congress, such as medical malpractice reform,
11:03 am

sales the across interstate line and it also doesn't include a couple of the amendments we agreed to in the last couple of meets, the estimates are not reflecting the true bill. >> dickerson: so in terms of this first phase, the president is basically going to have to, isn't going to take care of those, those states aren't being taken care of now but they hope through legislation they will get the relief the president is asking for. >> i disagree, i think those folks will immediately be better off, because again you are focusing on what it costs to buy a health insurance policy, coverage. but that doesn't allow you to go to the doctor. so the real question is, when you get sick, whether you be able to go get care? and i think without exception, those folks would be better off under the new plan than they are under obamacare. >> dickerson: you mentioned a new plan. the president said as a candidate, about healthcare there was a philosophy in some circles if you can't pay for it you don't get it, meaning healthcare, that is not going to happen. with us. he said he meant universal care there.
11:04 am

you are not going to have universal care -- >> the only way to have universal care, that, if you stop to think about it, is to force people to buy it under penalty of law. so what we are replacing, what you have now is we are forcing to, we are forcing people to bye-bye it under penalty of law and people are looking for a way not to buy it so the government mandate doesn't work, the better function is what we are trying to do now which is to encourage people and enable them to buy a policy they want and can afford. >> dickerson: but universal care a was not really a promise he could -- >> the only way to get true universal care is to throw people in jail if they don't get it and we are not going to do it. >> dickerson: talking about the bunt, one of your guiding principles was when you start looking at places where we reduce spending one of the questions we ask was, can we really continue to ask a coal miner in or a car work never detroit and the answer is no, that a is a good starting
11:05 am

technique, what about the president's vacation when he goes down to mar-a-lago? as president trump, obama's vacations, now people are bringing that back to the president. what does a, does a coal miner or single mom say about the trips down to florida. >> you always attack a budget for being political, keep in mind who the president wrote the budget for. people who, he wrote the budget for everybody, we hear a lot of criticism, for example, habit different line items in the budget blueprint from members of congress. that is to be expected. i used to be a member of congress. i used t to represent 700,000 peoe and my first job was to represent their best interests. we have special interests at play on the hill, we have lobbyists that play on the hill. the president wrote this budget without consideration for those things, without being beholden to anybody except the people and that's who this budget is written for. >> dickerson: if you have think about a coal miner and single mom, savings begin at home, there are things the president can do to cut back on his own, using that test. >> the coal miner doesn't get to fly down to mar-a-lago either. >> i don't have a business card to give you because the in the
Check
11:06 am

office of not guilty and punishment we have to pay for our own business cards and it starts at home. >> dickerson: entitlements he says he doesn't want to touch medicare but he seems to be revising his thinking on that. >> the promise was he wouldn't affect anybody and we haven't with this budget. keep in mind what this budget is. this is just a discretionary spending part of the budget, which was a necessary first. i look at future retirement, future medicare -- >> dickerson: let me ask you a question, do you think social security disability insurance is what people think of when they think of social security? i don't think so, it is the fastest growing program, it brew tremendously under president obama and a very wasteful progra
left
right
disc Borrow a DVD of this show DVD
tv

CBS' venerable Sunday-morning newsmaker-interview show also aired in prime time in 1960 and '61. When the series premiered in 1954, the first guest was Sen. Joseph McCarthy.
quote Contains 1 quote, shared 33 times, with 17,447 plays.
Check
Contains 1 quote that has been factchecked by partners.